skip to main | skip to sidebar

Shadow of an Illusion

Posted by Rashneek at 9:57 PM No comments:

On a lazy Sunday we were tuned into Radio Sharda(a community radio of Kashmiri Pandits).Moti Lal Kemmu’s (a renowned scholar and an expert on Folk Theatre of Kashmir) interview was being broadcast . The interview was interspersed with requests of songs by Mr.Kemmu. He requested for Samad Mir’s poem “Praran praran Tarawatiye”.It was sung by Ama Kandur in Chakri(Kashmiri folk music) style. Though I had read many of Samad Mir’s poems I hadn’t heard of this one till then.


The poem describes Goddess Tara, her iconography and her attributes. I have heard from some people that Samad Mir’s Tarawati is a Kashmiri Pandit woman (who he might have seen or known) which is erroneous as we will soon discover. While he has contextualized the deity in Kashmiri environs yet the description is essentially of the one who he describes as the “Goddess who emerged victorious in Bengal”.


Goddess Tara (one of the Dash-Mahavidhyas) is primarily a Hindu Goddess who later manifests in Buddhist iconography as well, but the Goddess described by our poet is the one as she is described and worshipped in the Hindu pantheon. To be more precise the description matches the idol of the Goddess at the shrine of Tarapitha (in Bengal).The worship of Goddess Tara is not unknown to Kashmiris. Even today there are atleast two villages in South Kashmir which owe its origin to this Goddess- The village of Tarigom near Kulgam(which now has no traces of any temple) and the village of Taragom near Qazigund(which has a living temple of  considerable antiquity considering the stone sculptures and a spring dedicated to the deity).


I attempt to translate the poem.


For long have I sought thee, Reveal thy true self to me O! Tarawati,


Caskets of marigolds will I entreat you with, Reveal thy true self to me


Your parted pearl like lips, glowing red with human blood*


Deter me not with that mirage (of external manifestation), Reveal thy true self to me


(* In Mundmala Tantra,Goddess is described as consuming human as well as animal blood. She is said to be fonder of human blood, which is always on her lips. This has esoteric meaning and should not be fallaciously understood by its literal meaning.)


Eyebrows like arrows on a bow, dark eyes symbolizing annihilation


With scissors of spiritual transcendence, Reveal thy true self to me


Piercing, your eyelashes, that as boon you bestowed (on me)


Freed me from the bondage of death, Reveal thy true self to me


Resplendent, in your beauty, Adorable, you sit by the window


We beseech your divine grace, Reveal thy true self to me


A galaxy lies strewn on your tippet, Reveal thy true self to me


(*In Buddhist iconography the Goddess sits in the orb of the moon with sun forming the exterior orb. This verse could be a reference to that)


Thy orb (ajna chakra) is a million rubies,O hide it not(under your headgear)


Beneath the darkness (of your black hair) shines gnosis, Reveal thy true self to me


Intense you are, glowing brighter than mercury


Smeared with blood, breasts shining (like fire), Reveal thy true self to me


*Since her lips are open (as mentioned in the second verse-lab chey vatheye) blood keeps oozing out and after falling on her breasts it resembles fire.


Bereft of sleep, your devotees seek (you), bewildered and mesmerized


In rapture, by the grace of vermillion (on your forehead), Reveal thy true self to me


*The opportune time to invoke the blessings of the Goddess is between midnight and breaking of dawn, which explains why devotees are bereft of sleep (naendere hateye)


You the embodiment of art, who reigns over Bengal


What hath gave thy absolute wisdom, Reveal thy true self to me


Rise through the seven chakras of Kundlani, purified like ivory


Awakened, you will realize the Goddess, Delve into thyself


*There are seven ladders in awakening (Jagriti) of self. It is called the rise of Kundalini.He/She who reaches the highest ladder(Sahasrar Chakra) is considered the realized one and the one who sits (metaphorically) near his/her deity.


Perfect this art here, triumphant will you emerge there


From Samad Mir, learn the art of awakening (the kundalini), Delve into thyself

Posted by Rashneek at 1:31 AM No comments:

I asked His Holiness,Swamiji,Is it possible that a saint can fall to temptation or desire? A true saint has reached a stage where desire and temptation stays away from him or her. It becomes his/her second nature to be bereft of desire so the question of falling to a temptation doesn’t arise. I am not very sure if I have written it as well as he explained it to me but I had got my answer.


For many days I was trying to comprehend the meaning of the verse,


Now that I had “understood” (or so I believe) the meaning, I am making an attempt to translate the poem from which the verse is.


That mendicant, like blazing sun; is my guide to the house of God


Omniscient that King, I see; is my guide to the house of God


That mendicant, like a blossoming garden; in colorful attires


He, the wine of truth in the carafe of unity; is my guide to the house of God


That mendicant, like copious fragrance of flowers in pain (seeker); iridescent jewels in ears


Effulgent at all times; is my guide to the house of God


That mendicant, the repository of knowledge for learned; zenith of gnosis for the seeker


Song of piety for the virtuous; is my guide to the house of God


That mendicant, the keeper of the secret treasure, leader in the court of love


The king who writes our destiny; is my guide to the house of God


That mendicant, possessor of secrets and devout; who effortlessly keeps desire away


Kalima(Faith) between two Meem’s(Nastaliq alphabets); is my guide to the house of God


That mendicant, as “hu” I saw exhale; entered my mortal body as soul


He, the Noah of my boat; is my guide to the house of God

That mendicant, eternal, will and shall remain; he who intoxicates me and the wine


Whose name is the wine of the mystic, is my guide to the house of God


That mendicant, who is resplendent in both worlds’; resides in my every breath,


Outside whose door I(Ahad Zargar) await, is my guide to the house of God 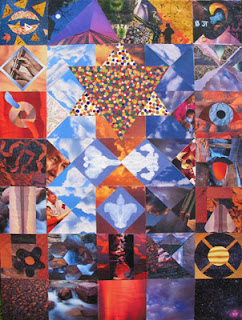 The collage painting by  Claudia Dose represents the 36 tatvaas of Kashmir Saivism. One can clearly see the influence of the great Kashmiri Master of Neo-tantric art Ghulam Rasool Santosh.
Not many people in Kashmir would have known the name, Ali Mardan Khan, had it not been for the small area in downtown Srinagar that is named after this Afghan Governor. Despite this he would have remained a name in the books of history like many others rulers but for the verses that immortalized him in Kashmiri Folklore, despite him not being a Kashmiri. The verses were written at a time which was clearly our dark ages. It was forbidden for non Muslims (read Hindus) to read their scriptures or practice their religion openly. I am not sure if it is entirely true but it is widely believed that the Hindus were ordered not to recite Sanskrit verses thus forcing them to make Persian as their language of connect to their deities. Whatever may be the historical accuracy of this “order”, to this day we recite Bhakti verses in Persian and there is one in particular which I remember and goes something like this:


That Goddess Chakreshwari, who can turn a beggar into a king


She who listens to our prayers and answers them


I salute, thee, Seat of Lakshmi, who incarnates in the form of Sharika (in Kashmir)


To cut a long story short, one evening Ali Mardan had a vision which took the shape of a beautiful Persian Devotional Poem .Most of us keep rendering them at religious and social festivals with fervor & devotion. Thanks to the oral tradition that has helped carry this poem in its totality to us. It also is a commonplace in most of our Leela* renditions. I am using the version published in Sahaj Kosam (compiled by Moti Lal Saqi) for Mast Bab Ashram. It is slightly different from the version (the last verse differs) that comes down to us via the oral route .I make an attempt to transliterate the verses.


It was Shiva, the real God, the King I saw that night


Adorned was his body with Lion Skin, the King I saw that night


Besmeared with ash, Instead of the scared thread a snake coiled around his neck


Un ebbed flow the Ganga from his locks, the King I saw that night


Brighter than sun and moon, shone his three eyes


In Salutations to him stood Vishnu, Brahma and Shiva (the 3 causes of the universe), the King……….


**This verse needs a little explanation, the three reasons though commonly understood as Shiva,Vishnu and Mahesh are seen in a different way by the Saivities of Kashmir. The Will (Iccha Shakti of Citi-Supreme Consciousness) in itself has the triple process of manifesting, maintaining and dissolving the universe. So the three reasons could also be understood as attainment of Swantraya (Freedom from Bondage of Ignorance)


The Crescent Moon embellished his forehead, the King……….……


Uma on his left, effulgent, like a thousand suns


Beseated on Nandi, I saw the king that night……


Wonderstruck I said Namo Narayan, incredible sage he was


In reverence, I bowed to touch the specks of dust at his feet, the King……….


With his divine grace (Anugraha) ,he showered his radiance


Immersed me in the universe of consciousness, the King……….


Is witness to a mystic experience, the King……….


I Ali Mardan a devout Muslim , who owes every breath to Ali (the Caliph).


This poem is also a reiteration of the Kashmiri Saivate standpoint of the world being real as against the Vedantic concept of it being Maya (unreal).That the poet’s vision is not of a formless deity but one that he describes in great detail with its physical attributes and iconography reinforces the Kashmiri Saiva thought of the creation being real when Unmesh (broadly translated as opening of eye/thought )happens.


Note:  I would welcome improvements in translation. Persian is not a language I am well versed with. I thank my friend Geetika, without her help this translation would not have been possible.


*Leela is a Kashmiri Devotional Poem.
Posted by Rashneek at 9:35 PM No comments:

Rashneek
I sell Fertilizers to eat food,write poetry in Kashmiri to feed my soul.Look for will-o-wisps to lead me.So far they have failed me and I have failed them.

Insanity in individuals is something rare-but in groups,parties,nations and epochs it is the rule 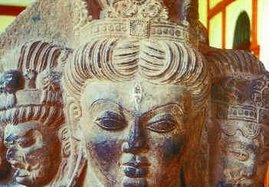 Three-faced Siva. This large and magnificent sculpture, which shows three aspects of Siva and displays the typical Kashmiri style, is one of the finest depictions of the deity in the subcontinent 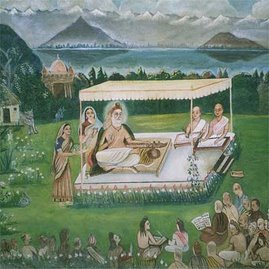 Acharya Abhinavgupt on the banks of Dal Lake,in the background one can see the hills of Sharika and Shankaracharya,Circa 11th century 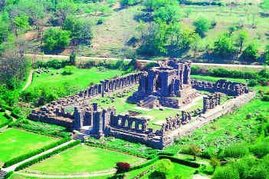 The Sun Temple at Martand. Like the Sun Temple at Konark, the Martand temple was one of the greatest Indian temple structures. Kashmir had some of the most important temples in the early period in India. 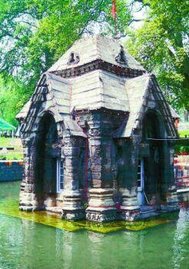 The Siva temple at Pandarethan, Srinagar, circa eighth to ninth century. 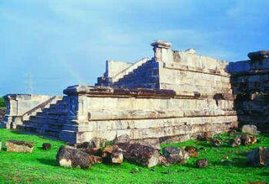 Parihaspura, In the eight century, it was one of the greatest Hindu and Buddhist religious centres in Kashmir, The remains of magnificent stupas and temples testify to the glory of Parihaspura 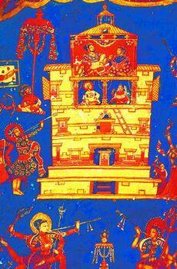 Mural from Alchi monastery, 11th century. Exquisite paintings like this one were made by Kashmiri artists in 108 monasteries across the Himalayas. They form a vivid visual record of the culture and lifestyle of Kashmir in that period. These paintings present the architecture, textiles, temples, forms of worship, and dancers and musicians. 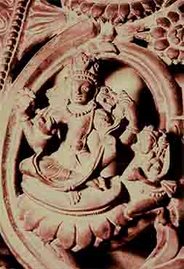 Images of Vishnu from Devasar 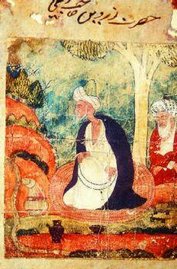